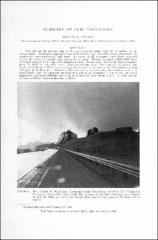 Ohio lies on the eastern edge of the maximum frequency belt for tornadoes in the whole world. Tornadoes approach from all directions, but about 90 percent come from the southwest, west-southwest, and west. As many as 32 tornadoes have been reported within the State in a single year and as few as none. During the period 1953-1968, Ohio averaged slightly more than 10 tornadoes a year. In contrast, reports of Ohio tornadoes prior to 1875 are especially rare. Upon examining these Ohio tornado statistics, one might conclude that there has been a great increase in the occurrence of tornadoes during the past 10 to 20 years. However, this can not be scientifically documented, and it is more likely that the apparent increase in numbers of tornadoes is due to the increased population and more efficient reporting procedures of more recent years. A brief resume of some of Ohio's worst tornadoes is given.