Essential science knowledge for non-science majors: an electronic survey of The Ohio Academy of Science members and associates 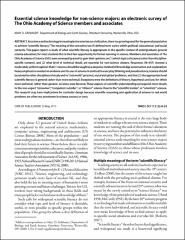 As science and technology increasingly characterize our civilization, there is a growing need for the general population to achieve "scientific literacy." The meaning of this attractive but ill-defined term varies within political, educational, and social contexts. This paper reports a study of what scientific literacy is appropriate in the specific context of undergraduate general science education; for most students this is their last opportunity for formal learning in science. Members and associates of The Ohio Academy of Science (OAS) were surveyed by email to gain their opinions on (1) which topics of science (other than discipline specific content), and (2) what level of technical detail, are essential for non-science citizens. Responses (N=557) showed a moderately uniform opinion that (1) science should be taught as a stepwise method of knowledge construction and explanation; heavy emphasis is needed on evidence and its uses in science in contrast to everyday thinking and pseudoscience; science should be related to other disciplines of study and to "real world" personal, social and global problems, and that (2) the appropriate level scientific literacy is general rather than more technical. Exceptions were the definitions of theory, hypothesis and law, for which more technical, rather than general, versions were favored. These aspects of scientific understanding correspond more closely to the non-expert "consumer", "competent outsider", or "citizens" science than to the "scientific insider", or "scientists" science. This research may have implications for curricular design because scientific reasoning and application of science to real world problems are often not prominent in science courses or texts.