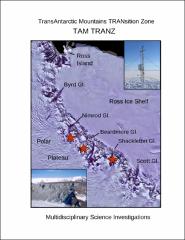 This report provides background information on the scientific issues that can be addressed by research in the Transantarctic Mountains, and a set of recommendations for facilitating the science objectives. The Transantarctic Mountains divide the Antarctic continent and are the locus of barriers and gradients of interest to many disciplines. The mountains are located on the transition between two crustal provinces of contrasting characteristics. The evolution of this transition reflects the history of development of one of Earth’s major intra-plate mountain belts. The mountain belt is the product of, and records, the interactions between climate, glacial and tectonic processes, and thus also documents the early stages and subsequent evolution of Cenozoic glaciation. The range forms a barrier between ice in East and West Antarctica, although the outlet glaciers provide a dynamic connection between the two massive ice bodies. The range also forms a barrier in large scale atmospheric processes, but with katabatic flow from the polar plateau, funneled down the outlet glaciers, interacting with air masses over the Ross Ice Shelf. Overlain on these physical attributes is a latitudinal gradient in ecosystems. Significant and fundamental questions in geology, glaciology, meteorology and biology, and at the dynamic interfaces between these disciplines, can be addressed by a long term program of research supported by remote logistic hubs. The workshop participants recommend that: 1. USAP support a decade-long project along the Transantarctic Mountains to investigate significant and compelling research issues encompassed by a wide range of disciplines; 2. the first Logistic Hub be established for the 08-09 field season on Bowden Névé near the Beardmore Glacier; and 3. a Project Office be established to co-ordinate activities conducted by this proposed decade-long program of multidisciplinary research. These activities would include coordination and support of an annual workshop, co-ordination of projects with the USAP field contractor, and co-ordination of outreach and education efforts.

Material in this document may be copied without restraint for library, abstract service, educational, or personal research purposes.