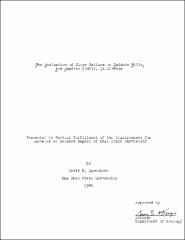 The Baldwin Hills area has suffered widespread damage from slope failures in the past. The problems of slope instability are particularly severe in the area for two reasons. First, the development of the hills was prior to the enactment of grading codes by local government. Second, the terrain consisted of steep slopes underlain by soft sedimentary rocks. Slope failures in the Baldwin Hills have occurred in the form of landslides and erosion, associated with unusually heavy winter rainfall. The landslides are in form of mudslides with soil slips and mudflows. These failures are derived partly from the mantle of soil and slope wash that overlies the bedrock of clay-rich material on natural slopes. Slopes underlain by Culver sand are particularly vulnerable to erosion. In the most densely developed areas of Baldwin Hills that have suffered slope damage in the past, 345 (about 21%) of 1668 residential properties are known by the California Division of Mines and Geology (CDMG) to have been damaged by slope failure. Additionally, about 93% of the 1668 residential lots apparently have potential for at least minor damage from slope failure in the future, unless measures are taken to stabilize slopes that include or endanger these properties (Weber, 1982).