An investigation into the geomorphology of the Ohio Caverns 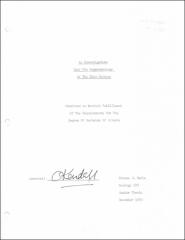 The Ohio Caverns are located in north west Champaign County about four miles east of the town of West Liberty, Ohio on Route 245. The caverns are perhaps the most extensive in the entire state. The caverns wind through the rock in a particular configuration. This paper attempts to establish a relationship between this configuration and the joint patterns in the area. The caverns also have a particular internal configuration. This paper also attempts demonstrate how this internal configuration is a function of various geologic processes. It becomes involved in a consideration of the origin of the debris in the cave and the effects the debris had on the formation of the cave. It considers the effects the water table had on the cave as the water table retreated. This report also deals with present processes going on in the cave and attempts to relate them to the local geology.