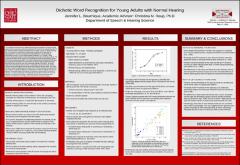 The purpose of this study was to measure dichotic word recognition at various intensity levels in order to produce a performance-intensity (PI) function that modeled the data. For any test that requires a behavioral response from a listener, such as a dichotic listening task, it is important to understand the relationship between the stimulus and the responses given. One way of characterizing this relationship is by generating a psychometric function, or in the case of speech recognition, a PI function. These functions display percentage of correct responses as a function of intensity in dB HL. The purpose of this study was to create a PI function based on the dichotic listening results from normal hearing young adults. The present study attempted to determine if the slope and threshold characteristics of the PI functions for dichotic listening differed between right and left ears as well as from that of monaural listening PI functions. Ten young adults with normal hearing were recruited to participate in the present study. Dichotic word recognition performance was measured at six different intensity levels. The results indicated a significant difference in the slope of the PI function between the right and left ears, whereas no significant difference in threshold was observed between the right and left ears. The overall shape of the dichotic PI functions is similar to that of monaural PI functions. In contrast, both slope and threshold characteristics of dichotic PI functions differed from monaural PI functions. Specifically, dichotic PI function slopes were shallower and thresholds were higher when compared to monaural functions.