Foods Eaten by a Beaver Colony in Southeast Ohio 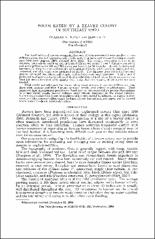 The food habits of stream-occupying beavers {Castor canadensis) were studied at two different sites, located approximately a mile part, in Athens and Vinton Counties in southeast Ohio from August, 1964, through June, 1965. The colony, consisting of five to six beavers, both adults and kits, cut or barked 352 stems at site 1 and 1,218 stems at site 2, and averaged between 245 and 295 stems per beaver for 10 months. At site 1, ironwood, buttonbush, Virginia pine and red elm were preferred foods, while common alder, red elm, ironwood, and soft maple were preferred at site 2. The distance traveled to feed on each species indicated that alder, soft maple, and red elm were most preferred. Utilization of preferred food species closely followed their availability at both sites, but it was stems less than 2.0 inches dbh that were usually cut. Less than one percent of the stems cut were wasted. Food stocks are adequate for beaver along most streams in southeast Ohio, but conflicts with humans and with fluctuating water levels limit colony establishment. Until improved land-management practices or flood-control structures reduce present fluctuations in annual water levels, beaver colonies must remain transient on the major streams. Stream sites utilized for future transplants of beavers should be adjacent to stands of ironwood, red elm, common alder, maple (red and silver), buttonbush, and aspen, and be located where water levels are relatively stable.