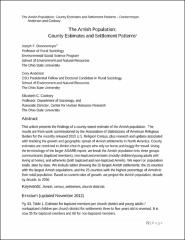 This article presents the findings of a county-based estimate of the Amish population. The results are from work commissioned by the Association of Statisticians of American Religious Bodies for the recently released 2010 U.S. Religion Census, plus research and updates associated with tracking the growth and geographic spread of Amish settlements in North America. County estimates are restricted to Amish church groups who rely on horse-and-buggy for travel. Using the terminology of the larger ASARB report, we break the Amish population into three groups: communicants (baptized members), non-baptized members (mostly children/young adults still living at home), and adherents (both baptized and non-baptized Amish). We report on population totals, state by state. We include tables showing the 25 largest Amish settlements, the 25 counties with the largest Amish populations, and the 25 counties with the highest percentage of Amish to their total population. Based on current rates of growth, we project the Amish population, decade by decade, to 2050.