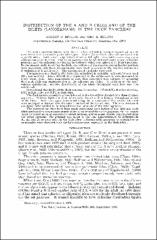 The avian pancreas differs from that of other animals in being composed of two or more lobes and in containing two islet types. Alpha (A) and beta (B) cells are located in separate islets. Islets containing beta cells are called light islets; islets containing alpha cells are called dark islets. The avian pancreas can be divided into exocrine and endocrine portions, and the endocrine portion can be further divided into light and dark islet portions. In the present study involving the duck, the volumes of the exocrine and endocrine portions were measured, and these measurements were used to calculate the relative volumetric distribution of A and B cells. The pancreases of six ducks were used. The pancreas was fixed in 10% formalin, embedded in celloidin, and serially sectioned (30 M per section). Areas of both islet types and of the entire section were measured on every tenth slide. Area measurements were then converted into volumes by assuming that each slide was representative of the adjacent ten slides. In addition to the total volume calculations, relative distribution of the islets throughout each lobe was also calculated. It was found that 99.2% of the duck pancreas is exocrine. Of the 0.8% that is endocrine, 0.3% is light islet and 0.5% is dark islet. The duck pancreas consists of two lobes with the dorsal lobe divided into three distinct segments. Neither light nor dark islets were distributed uniformly throughout either of the lobes. Both islet types were found along the central axis of the ventral lobe and were arranged in clusters near the ventral surface of the dorsal lobe. The islet clusters of the dorsal lobe tended to be located near the junctions of the lobe segments. The observations that have been made concerning distribution of the light and dark islets are based on area measurements of serial sections of the entire pancreas, on islet counts made by observation of consecutive serial sections, and on paper models constructed from the serial sections. No attempt was made in the area measurements to differentiate Ai, A2, and D, or clear cells, in the dark islets, although cells appearing to contain few or no granules were observed with the light microscope, especially in the dark islets.