Growth Under the Gun: An Empirical Examination of the Impact of Small Arms and Light Weapons Transfers to Central America and Mexico on Economic Development, 1995-2011 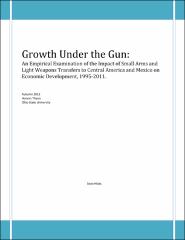 This paper examines the impact of small arms and light weapons (SALW) transfers on the economic development of Central America in the years following the armed conflicts of the 1980s and 90s. While a great deal of attention has been paid to armed violence in general, the economic effects SALW transfers to developing countries have not been sufficiently deciphered. Specific details of the effects of SALW transfers on economic development need to be clearly understood if poverty alleviation goals, such as the Millennium Development Goals, are to be met by 2015. This paper conducts regression analyses on the imports of SALW and selected economic indicators in Central America from 1995-2011 using data from the World Bank and U.N. Comtrade to attempt to illuminate these details. Despite the well-known fact that SALW are destructive to economic development, results herein are inconclusive.