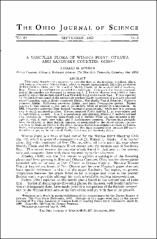 This study describes the present-day vascular flora of the marshes, woodlots, dikes, and drainage ditches of Winous Point, which is located approximately 3 1/2 miles southwest of Port Clinton, Ohio, near the mouth of Muddy Creek, at the western end of Sandusky Bay. Vascular plants found are recorded in a catalogue. Changes in the floristic composition of the marshes are discussed by comparing A. J. Pieters' observations (1901) of some marsh plants at the western end of Lake Erie with the present marsh flora. Plants reported by Pieters but not found at the present are predominantly submersed or partially emersed rooted aquatics, such as Elodea canadensis Michx., Nais flexilis Rost & Schmidt., Sagittaria graminea Michx., Vallisneria americana Michx., and some Potamogeton species. Zizania aquatica L. was common at the turn of the century, while at present it is uncommon. In 1901 Phragmites communis Trin. formed "extensive associations," while now it is common only in small scattered patches. Pieters reported Typha latifolia L. as everywhere and T. angustifolia L. as rare. Now T. angustifolia is very common, whereas T. latifolia is found only sporadically. Sagittaria rigida Pursh and S. latifolia Willd. are also reversed in frequency, with S. rigida rare today and S. latifolia now common. Factors that probably have contributed to these floristic changes, as exemplified by the above species, are construction of drainage ditches in the Black Swamp, marsh management practices at Winous Point, and pronounced physiographic changes that have occurred over the past 150 years (based on maps) at the mouths of Muddy Creek and the Sandusky River.