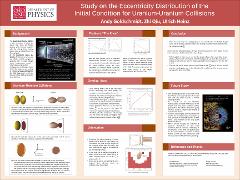 A few microseconds after the Big Bang that created our universe, all matter existed in a flowing fireball known as the Quark-Gluon Plasma (QGP). During the last decade, physicists figured out how to create QGP in the laboratory. The Relativistic Heavy Ion Collider (RHIC) at Brookhaven National Lab accelerates large atomic nuclei to near light-speed before colliding them with each other. The results are little fireballs that subsequently explode like miniature versions of the Big Bang. We call these Little Bangs. My research aims at a better understanding of the quantum fluctuations in the initial state of the Little Bang and their influences on its later evolution. The typical collision pairs at RHIC have been restricted to geometrically spherical gold or copper nuclei. However, in April of 2012, RHIC physicists began shooting uranium-238 nuclei at each other inside the collider. In my work, I focused on the new range of collision types available because of the football-like geometry of uranium. In central uranium events, where the colliding nuclei fully overlap with each other, collision orientations can range between two extremes. In side-side events, the major axes of the elliptic uranium nuclei point perpendicular to the collision line, while in tip-tip events the major axes are parallel to the beam direction. These orientations affect both the overlap area and the number of collisions between nucleon pairs. Even for completely central collisions, these orientation effects result in a significant variation in initial conditions which among spherical nuclei can only be achieved by varying collision centrality. Moreover, the number of produced secondary hadrons varies in a way that preferentially selects certain orientations at low or high multiplicity in the observed final states. This changes the dependence of the initial fireball eccentricity and nuclear overlap area on the total observed multiplicity from what was observed in gold-gold or copper-copper collisions, where orientation played no role. This specific discrepancy was the subject of my study.