"I'm hoping for a miracle" and "I am too": Hopes Expressed Between Victims and Offenders Following Detention for Domestic Violence 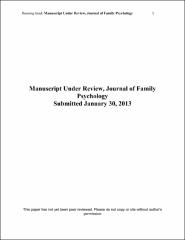 We used a phenomenological qualitative approach to examine hopes expressed between domestic violence victims and offenders during the especially fragile time immediately following the offender's detention. Audio-recorded telephone conversations of 17 couples were analyzed (up to 120 minutes of conversational data for each couple), using a lexical definition of hope as the starting point. Data analysis began with the generation of narrative summaries, followed by the thematic identification and coding of expressed hopes within each relationship. Several hopes were expressed consistently by victims and offenders. The most consistent hope was the desire for love to be known and reciprocated. These hopes were complicated, however, by real or imagined threats to the fidelity of their relationship and concerns about the ability to overcome relational conflict. In addressing these concerns, partners expressed hope for explanations of truth about controversial behavior, change in future behavior, and personal exoneration from blame. Emotionally-charged discussions, regarding relationship turmoil, occasionally entailed victims and offenders expressing a desire to end the relationship. Vacillations in the desire to maintain the relationship, however, were temporal in nature, with couples returning to expressions of love, a desire for sympathy or help, and hope for the offender's release. These findings advance an understanding of the dynamics of violent couples and the complex emotional experience following a severe violent event. As a collective process, even when heated discussions about ending the relationship and disagreements about change or blame occurred, couples commonly still returned to expressions of love, and hope for the offender's release.