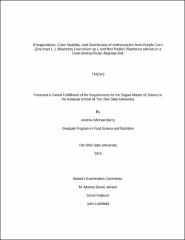 Anthocyanins are a broad class of water soluble pigments found in a wide array of plants. They are responsible for a variety of the attractive colors found in fruits including red, purple, orange, and blue. There use as a natural alternative to synthetic colorants has been investigated extensively in the past several years as consumers have been asking for greater choice in the marketplace. Their limited stability in food applications several limits their widespread adoption. Meanwhile, other research has been focused on the potential health promoting benefits of eating a diet high in anthocyanins. The objective of this work was to encapsulate an anthocyanin rich extract in a novel system that uses pectin and alginate as the encapsulating material in hopes to increase stability. It was then necessary to investigate not only the color stability of the particles, but also the anthocyanin stability and profile as well. A variety of anthocyanin sources was chosen to represent a cross section of the structural differences that exist: blueberry (5 of the 6 common anthocyanidins all with a single, varying sugar moiety), purple corn (3 monoglycosylated anthocyanins and their malonated counterparts), and red radish (pelargonidin derivatives with 3 glycosylations and aromatic acids). All three anthocyanins sources were successfully encapsulated using the technique described later. The stability of the particles was monitored by increasing color of the solutions the particles were stored in, the color of the particles themselves, and the total monomeric anthocyanin content of both. The purple corn particles performed the best in regards to color leaching into the solution. The solution color indices for the experimental and control were more different than for the other anthocyanin sources tested. This performance carried over when measuring the color of the gels directly. The purple corn loaded gels were statistically darker and had greater color intensity than the empty control gels. The red radish loaded gels performed the worst for every measurement that was taken. The interesting difference was noted in the amount of anthocyanin recovered from each gel. The amount of anthocyanin leached into the solutions was not different among the sources. Another interesting note was that the anthocyanin profile of the various extracts did not change significantly during the storage study, meaning that preferential leaching or retention in the gel was not noted. The pectin-alginate system was able to encapsulate various anthocyanin rich extracts, with the purple corn performing the best of those tested, with the blueberry performing similarly. Since these anthocyanins are relatively small compared to others, it is theorized that molecule size is not the main factor contributing to pigment retention. It is possible that other anthocyanin sources will work just as well.