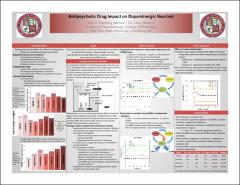 Antipsychotics are used to treat people diagnosed with schizophrenia by blocking dopamine receptors, specifically the D2 subtype. These drugs all increase dopamine in the extracellular to a similar extent by increasing firing rate and synthesis of new dopamine. However, the drugs vary on the rate of synthesis and the amount of dopamine’s metabolite, DOPAC. Previous research has shown this might be due to the difference of antipsychotic drugs’ affinity to the D2 autoreceptor. The purpose of this study is to explain the variability of antipsychotic drugs on the differences in DOPAC levels and dopamine synthesis rates. The way chosen to study this is through a computational model that records the amount of dopamine and DOPAC molecules in certain compartments of a neuron over a certain time. This model includes all known mechanisms and pathways in which dopamine and DOPAC can be created, transported, and metabolized. By studying the changes in levels of dopamine and DOPAC and the pathways involved, one can make conclusions about the area(s) that a drug acting on a dopaminergic neuron effects. When using antipsychotic drugs, the model showed that there was a difference between the leak of dopamine molecules out the vesicles into the cytosol depending on the drug used. The greater the ability the drug had to penetrate the membrane of the neuron and eventually vesicular membrane, the greater the amount of dopamine leaked out of the vesicle. The higher leak value directly correlated to higher cytosolic DOPAC levels and dopamine synthesis rates of the cytosolic pathway. These results explain another possible mechanism of the drug that controls synthesis rates besides D2 receptor activity.