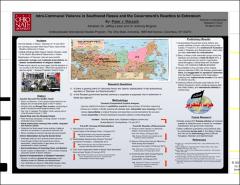 On July 19, 2012, head mufti Ildus Faizov was nearly assassinated and his deputy Valiulla Yakupov was murdered by a radical Islamic sect in the city of Kazan in Tatarstan, Russia. This unprecedented terrorist attack was motivated by the extremists’ outrage for their leaders’ moderate prescriptions on Islamic fundamentalism. Such deadly intra-communal violence triggered a strong military response from the Russian government. In line with Putin-era security policies, the Federal Security Service (FSB) continues to actively pursue extremists in the conflicts of the North Caucasus. However, initial inquiries suggest the dissatisfaction of ethnic minorities with federal mandates extends beyond this war-torn area. Through news source analysis, this study examines the growing trend of nationalist fervor and Islamic radicalization in the republics of Tatarstan and neighboring Bashkortostan. The field research is currently on going, and conclusions will be presented in preliminary form. The results of this project will provide important knowledge pertaining to political violence in a region not heavily studied in current academic circles.