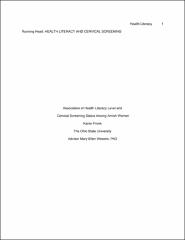 Background: Health illiteracy is a national problem affecting as many as 35% of English-speaking patients (Sharp, Zurawski, Roland, O’Toole, & Hines, 2002) and costing the health care system as much as $73 billion dollars per year (Feifer, 2003). Some new research shows an association between low health literacy and poor health promoting behaviors (Baker, Parker, Williams, Clark, & Nurss, 1997; Lindau et al., 2002; Wilson & McLemore, 1997). However, little is known about the health literacy status in relation to cervical screening rates of women in specific populations, particularly the Amish. The Amish are a religious group of medically-underserved and under-studied people, many of whom reside in the Appalachian regions of Ohio. The Amish have many culturally imbedded perceptions of healthcare which guide their utilization of professional healthcare (Wenger, 1995). Purpose: The purpose of this study was to describe the relationship between health literacy and cervical cancer screening among Amish women in the Appalachian regions of Ohio. Methods: A secondary-analysis of unpublished data collected from the “Cancer screening among Amish adults” study (Katz et al., 2004) was conducted. The original data were collected through in-depth face-to-face interviews of Amish men and women regarding their cancer-related behavioral lifestyles. This secondary study used answers to the question regarding the most recent cervical cancer screening and the results from the Rapid Estimate of Adult Literacy in Medicine (REALM), which were taken from the original study. Findings: A total of 72 women were interviewed. The average age of the sample was 52, with an average of 8 years of education. Over 93% were married. The average health literacy grade level (3.37) for women within screening guidelines was similar to the grade level of health literacy for women not within screening guidelines (3.00). The levels were significantly different per screening group as seen in the Chi-square analysis (x2 = 9.45, df = 2, p = 0.009). Of the 72 women, 38 (52.8%) were within screening guidelines and 34 (47.2%) were not within screening guidelines. Conclusions: According to the Chi-square analysis, the higher the score on the REALM, the more likely a woman is to be within cervical screening guidelines. Although both the screened and unscreened groups had functional levels of health literacy, a large percentage of women were not within screening guidelines, emphasizing the need for further strategies to improve cervical cancer screening.