The Role of egl-38/Pax in a C. elegans Hindgut Infection 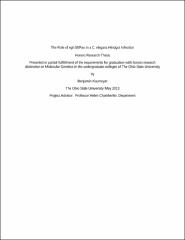 Pax genes encode transcription factors that help to control developmentally important events such as cell fate specification and organ formation in both C. elegans and humans. The C. elegans gene egl-38 is an ortholog of Pax2/5/8 and is important in the development of the C. elegans hindgut. The hindgut can be colonized by a coryneform bacteria M. nematophilum resulting in swelling of the hindgut. Interestingly, C. elegans with a non-null hypomorphic allele of egl-38(n578) show a greatly reduced swelling response upon exposure to M. nematophilum. Furthermore, when these animals are stained with SYTO 13 to visualize the presence of M. nematophilum, no colonization of the hindgut can be seen. However, the mechanism for how EGL-38 is able to mediate M. nematophilum sensitivity is unknown. I hypothesize that specific EGL-38 dependent genes mediate the sensitivity. To test this hypothesis, I am focusing on an O-acyltransferase membrane associated protein encoded by bus-1. bus-1 expression is reduced in egl-38(n578) animals and bus-1(e2678) null mutants also exhibit the same resistance to M. nematophilum observed in egl-38(n578). To test whether the M. nematophilum resistance of egl-38(n578) animals could be explained by reduced bus-1 expression, we cloned the bus-1 coding sequence downstream of an egl-38 independent promoter. egl-38(n578) animals with this rescue construct showed a greater proportion of M. nematophilum induced swollen hindguts compared to egl-38(n578) without the rescue construct. But these rescued egl-38(n578) animals showed a smaller proportion compared to rescued bus-1(e2678). These results suggest that reduced bus-1 expression in egl-38(n578) partially explains the infection resistance, but other genes regulated by EGL-38 also mediate hindgut pathogen interactions. I am using analysis of the bus-1 regulatory sequences to identify other EGL-38 dependent genes that help mediate the response in order to better understand developmental regulatory gene networks and host-pathogen interactions.