The Effect of Acetaminophen on Conformity 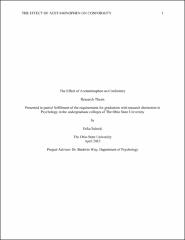 Why do certain individuals feel the pressure of social influence, and thus conform to their peers, more than others? Normative conformity postulates that it is due to individuals’ fears of being deviant from the group. Consistent with this hypothesis, neuroimaging studies have shown that greater conformity is associated with activity in brain areas that are involved in processing the emotional pain of social rejection. Since the physical pain-killer acetaminophen reduces activation in these brain areas as well as reduces hurt feeling associated with rejection, we sought to determine if acetaminophen also reduced conformity. If acetaminophen can reduce social pain, can it also lessen the submission to social pressure? This hypothesis was tested using a between-subjects design that compares the performance of an acetaminophen (test) group to the placebo (control) group on a commonly used social influence task (Berns et al., 2005). Participants are presented with two 3D shapes and asked to determine whether they are mirror images of each other or the same image merely rotated. Then, they are presented with the decision of their “peers” and asked again what kind of transformation is related between the two shapes. Although there were no significant differences in conformity between groups in the rotation judgment condition, there was a significant difference in the preference condition and several significant correlations within the survey data. There were no significant differences in conformity between the placebo and drug condition. A secondary hypothesis was to explore the degree to which collectivism, a psychological construct related to rejection sensitivity, was related to conformity. A significant positive correlation between dispositional sensitivity to rejection and collectivistic orientation was found.