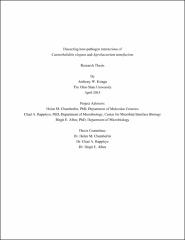 DNA transformation is a common tool in genetic research and engineering. In the model organism Caenorhabditis elegans, DNA transformation has primarily been through microinjection of the DNA into the syncytial gonad. This ensures the introduced DNA is passed down to the offspring. In an experiment to find alternative methods of genetic transformation, Agrobacterium tumefaciens was used as a candidate for the transfer of DNA from the bacteria to the eukaryotic cell nucleus. Agrobacterium is well known for its natural capability of trans-kingdom DNA transfer and can transform virtually any living cell. The bacterium has both transformation abilities and infection abilities. While we are working to develop the transformation abilities, we observed an unusual phenomenon in the intestine of worms cultured with the bacteria. Adult worms that were fed A. tumefaciens exhibited abnormal fluorescence in the intestinal cells. We are investigating it by setting up two experiments to study the viability and fluorescence difference between wild type and mutants deficient for any intestinal fluorescence. These experiments are designed to test whether the observed abnormal fluorescence results from induction or alteration of the pathway that mediates normal C. elegans intestinal autofluorescence, or whether another mechanism is involved. To test this hypothesis, a comparative experiment between wild-type worms and mutants for glo-1 (lacks autofluorescent and birefringent gut granules) and glo-4 (no autofluorescent granules in intestinal cells) genes was conducted. For worms cultured in A. tumefaciens, it is evident that the fluorescence observed is ancillary to the autofluorescence and present in glo mutants, and indication of causality. As the bacterium have virulent effects on the worms, we set up an experiment to define the level of fatality on the worms or resistance by the mutants. Wild type and mutants are being cultured with A. tumefaciens and Escherichia coli OP50 in this experiment. The long-term goal of this work is to better understand host pathogen interactions, and to optimize the use of Agrobacterium for DNA conjugation in C. elegans.