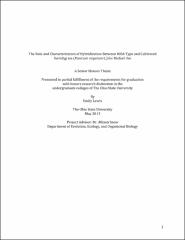 The introduction of new and widely planted cultivars for biofuels raises questions about their potential invasiveness compared to their wild-type counterparts. Switchgrass is a native, self-incompatible prairie grass that has been bred for biofuels and may be genetically engineered in the near future. Baseline information is needed about the rate of crop-wild hybridization to assess possible consequences of gene flow. In 2011 our research group established an experimental stand of 106 cultivar "pollen donors" at The Wilds, Cumberland, OH, surrounded by wild "pollen recipients" at distances ranging from 1-100 m away. The donors and recipients were derived from two distinct clones, each carrying two unique alleles at a specific SSR locus. I studied DNA from their seeds to see if they showed evidence of 1) hybridization as expected (due to self-incompatibility), 2) fertilization by unidentified switchgrass sources, or 3) self-fertilization. After optimizing my methods, I used capillary electrophoresis to genotype 8 F1 progeny from the donor plot, 16 progeny from wild recipients at each of three distances (1 m, 30 m, and 60 m), and 32 progeny from wild recipients growing 100 m away. I found that 100% of the offspring analyzed were heterozygous for the target SSR markers, confirming crop-wild hybridization at distances up to at least 100 m. I also found no evidence of self-fertilization or fertilization by another source of switchgrass. My results suggest that our research group can use seed set instead of costly DNA analyses to measure gene flow at this study site. In addition, the cultivar's ability to pollinate native switchgrass at distances of at least 100 m suggests that distance should carefully be considered before novel biofuel cultivars are planted in a new location or in field trials involving regulated transgenic switchgrass.