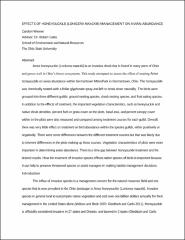 Amur honeysuckle (Lonicera maackii) is an invasive shrub that is found in many parts of Ohio and grows well in Ohio's forest ecosystems. This study attempted to assess the effect of treating Amur honeysuckle on avian abundance within Germantown MetroPark in Germantown, Ohio. The honeysuckle was chemically treated with a foliar glyphosate spray and left to break down naturally. The birds were grouped into three different guilds: ground nesting species, shrub nesting species, and fruit eating species. In addition to the effects of treatment, the important vegetation characteristics, such as honeysuckle and native shrub densities, percent forb or grass cover on the plots, basal area, and percent canopy cover within in the plots were also measured and compared among treatment courses for each guild. Overall, there was very little effect on treatment on bird abundance within the species guilds, either positively or negatively. There were some differences between the different treatment courses but that was likely due to inherent differences in the plots making up those courses. Vegetation characteristics of plots were more important in determining avian abundance. There is a time gap between honeysuckle treatment and the desired results. How the treatment of invasive species effects native species of birds is important because it can help to preserve threatened species or assist managers in making habitat management decisions.