Disease and Destitution: Malaria and the Liberation of New Guinea and the Philippine Islands 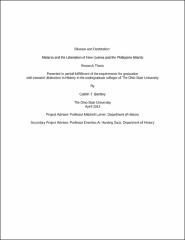 Malaria's impact on the U.S. 6th Infantry Division during their fight to regain New Guinea and the Philippine Islands was not only the longest recorded fight in the Pacific, but equally as important, it was the longest fight in a region plagued by malaria. The impact of malaria on the military effectiveness of this division was the most profound in this region, if only because of the psychological trauma such protracted warfare caused. By following the story of many who served in the region we can see the psychological trauma from the perspective of those who served and lived here.