Effect of Industrial Pollution on the Aquatic and Shore Angiosperm Flora in the Ottawa River, Allen and Putnam Counties, Ohio 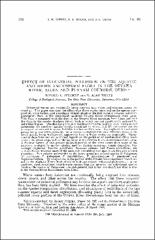 Industrial wastes are continually being emptied into rivers and streams across the country. This paper considers the effect that these wastes have had on the species composition, distribution, and abundance of individuals of the late summer aquatic and shore angiosperm flora in the industrially polluted Ottawa River downstream from Lima. This flora is compared with the flora in the Ottawa River upstream from Lima and with the flora in the nearby Auglaize River, both of which are not significantly polluted by industrial wastes. The flowering plants in northwestern Ohio rivers mostly belong in two categories: (1) southern species usually restricted to rivers, and (2) widespread species infrequent or common in rivers, but also in other wet habitats. Each species in the former group, being restricted, probably has a narrow ecological tolerance, whereas those in the latter group, being widespread, apparently have a wider ecological amplitude. Waterquality data from several published reports on the pollution of northwestern Ohio rivers reveals the great magnitude of the pollution in the Ottawa River downstream from Lima. A floristic survey of this grossly polluted portion of the river shows that many of the southern, ecologically narrow species, such as Justicia americana, Lippia lanceolata, Phystostegia virginiana, Samolus parvifiorus, Saururus cernuus, and Rutnex verticillatus, are rare or absent, whereas many of the more tolerant widespread species are frequent or even abundant. Particularly noteworthy in the latter group are several species of Polygonum (P. coccineum, P. hydropiper, P. lapathifolium, P. pensylvanicum, P. punctatum) and Sagittaria latifolia. By comparison, in the portion of the Ottawa River upstream from Lima and in the Auglaize River, both of which lack appreciable industrial pollutants, it is the southern, more restricted river-bottom species that are present; the widespread species (such as the species of Polygonum) are also present, but in far less abundance than is true in the Ottawa River downstream from Lima.