Affective Incongruity in the Work of David Lynch 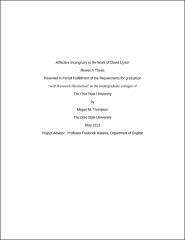 Cognitive psychology approaches to film have recently advanced to incorporating cognitive and neuroscience. With the exception of a few scholars such as David Bordwell, one of the first to bring a cognitive approach to film, film studies is only just beginning to take full advantage of the advances made in this area. We have seen some resplendent results that bring together cognitive science, neuroscience, evolutionary biology, and neuroanatomy in ways that have shed new, interdisciplinary light on the arts. Recently, emotional-affective research has added yet another important dimension to these approaches to film, enabling us to build frameworks for understanding better how viewers’ perspective and understanding of film are filtered through our affective mechanisms. In my research, I examine the incongruent emotions produced by David Lynch’s work, which push the boundaries of accepted emotions in ‘mainstream’ cinema. I use his work to study how narrative structure and stylistic techniques can effect and produce incongruent emotions, thus affecting how we make meaning and connection in the experience of viewing his film. In order to understand the connection of emotion and film, I use existing critical film theory on Lynch’s work and combine this theory with cognitive science and affective neuroscience research. The goal: to encapsulate the whole emotional process that occurs from his work and film in general. Often affective incongruity confuses a viewer, therefore acceptance and meaning from a ‘mainstream’ audience is hard to garner, especially in David Lynch’s enigmatic work. Therefore it is important to pay attention to these how these incongruent types of emotions (atypical in commercial cinema) are built into his film blueprints--and a cognitive and neurobiological approach promise to shed light on this.