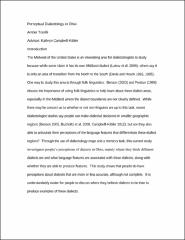 The Midwest of the United States is an interesting area for dialectologists to study because while some claim it has its own Midland dialect (Labov et al. 2006), others say it is only an area of transition from the North to the South (Davis and Houck 1992, 1995). One way to study this area is through folk linguistics. Benson (2003) and Preston (1999) discuss the importance of using folk linguistics to help learn about these dialect areas, especially in the Midland where the dialect boundaries are not clearly defined. While there may be concern as to whether or not non-linguists are up to this task, recent dialectologist studies say people can make dialectal decisions in smaller geographic regions (Benson 2005, Bucholtz et al. 2008, Campbell-Kibler 2012), but are they also able to articulate their perceptions of the language features that differentiate these dialect regions? Through the use of dialectology maps and a mimicry task, this current study investigates people’s perceptions of dialects in Ohio, mainly where they think different dialects are and what language features are associated with these dialects, along with whether they are able to produce features. This study shows that people do have perceptions about dialects that are more or less accurate, although not complete. It is understandably easier for people to discuss where they believe dialects to be than to produce examples of these dialects.