Characterization of Colonic Macrophages in Mice Exposed to Social Stressor During Oral Challenge with Citrobacter rodentium. 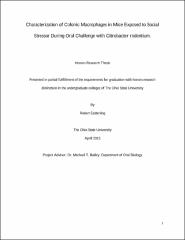 Chronic colonic inflammation, as well as exposure to psychological stressors, are well known risk factors for the development of colorectal cancer. Whether these two predisposing factors are linked, however, is not known. A murine social stressor, called social disruption (SDR), was used to test whether stressor exposure would increase colonic inflammation in mice infected with the colonic pathogen Citrobacter rodentium. When compared to non-stressed control mice infected with C. rodentium, stressor-exposure significantly increased pathogen-induced colonic histopathology, inflammatory cytokine gene expression, and the accumulation of F4/80+ macrophages in the colon. Other studies demonstrate that exposure to the SDR stressor without infection significantly increases the number of inflammatory monocytes in the spleen. Because splenic inflammatory monocytes can traffic to sites of inflammation, the goal of this study was to determine whether these accumulated colonic F4/80+ macrophages display an inflammatory phenotype (i.e., L6ChiCCR2+CD11b+) by using flow cytometry. To test whether colonic inflammation could be significantly enhanced by colonic macrophages, an adoptive transfer model was also used. In this experiment, monocytes isolated from the spleens of stressed mice were introduced into naïve mice, which were later infected with C. rodentium. It is expected that these non-stressed recipient mice will display similar inflammation and pathology as stressed mice. If proven true, it would mean that the stressor-primed splenic inflammatory monocytes are responsible for enhanced colonic inflammation. Increases in colonic macrophages may account for stressor-induced increases in colonic inflammation. Future studies will test the hypothesis that this increased inflammation predisposes animals to developing colorectal cancer.