Campaign Finance in the United States, the United Kingdom, and Canada 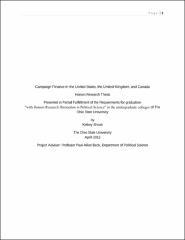 To survive, parties and politicians need a variety of resources to carry out their various functions of administration, voter persuasion, and getting out the vote. A key resource is money. Due to its ability to be transformed into other resources and its growing importance, political finance—specifically campaign finance—has generated a spirited debate within and among democracies. The existent body of literature on campaign finance describes differences between systems, the influence money has on elections and/or governance, and its impact on corruption levels within countries. I propose to add to the existent body of literature on campaign finance by addressing a different question: how does a country’s political structure, both formal and informal, contribute to the formation of its campaign finance regime? This study will focus on campaign finance in a portion of the Anglo-Saxon sphere, specifically in the United States, the United Kingdom, and Canada. All three democracies regulate campaign finance but have taken different approaches. I begin with a general comparison of the different campaign finance regimes of each country. Several possible explanations for the differences in the regimes are explored next, broadly divided into influences of the regulatory framework and influences of boundary setting. Influences of the regulatory framework include the type and number of offices being elected and the driving force behind a campaign. Influences of boundary setting are the length of the election season, the size of the electoral district, and the ratio of public and private funds being used. Finally, I examine the implications that these current regimes have on systemic corruption and changes in the democratic deficit within each of the countries. This project suggests that the campaign finance regime operating within a country is a function of the limits in place, primarily determined by that country’s political structure.