"There are no limits to this thing": Apocalypse and Human Identity in Leslie Marmon Silko's Ceremony 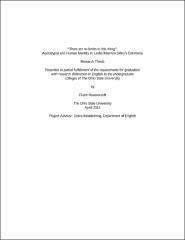 Leslie Marmon Silko’s 1977 novel Ceremony narrates the experience of a World War II veteran named Tayo returning to his home at the Laguna Pueblo in New Mexico. Suffering from what white doctors quickly dismiss as shell-shock, Tayo pursues a healing ceremony under the guidance of a mixed-blood medicine man to address the convergence of his traumatic personal history, the history of violence against his community and all American Indian tribes, and the metanarrative of Western history, specifically at its most recent and destructive point: global war and atomic weaponry. Due to the apocalyptic potential of the bomb — the Trinity site development and testing of which serves as the geographic nexus of these histories — Tayo finds himself at a “momentary standstill of history,” as theorized by Walter Benjamin in his “Theses on the Philosophy of History” (Scherpe 107). This point of crisis provides a “revolutionary chance” for Tayo to “read across the fragments of his experience and grasp the constellation of forces that has produced him” and his suffering, and to thereafter rediscover a traditional Laguna notion of human identity (Benjamin 263, Beck 152). Tayo absorbs into and unites in his individual identity the entire global community of life that is subject to the destruction of the bomb — transcending ethnic, national, and tribal distinctions as well as connecting with the landscape and animal life of and around the Laguna Pueblo (Scherpe 108, Beck 152). By recovering, reclaiming, and revitalizing this hybrid and relational notion of human identity, Tayo is able to complete a healing ceremony that confronts both his individual trauma and the violence of witchery and Western ideology that contextualizes it. My argument will first address the apocalyptic characterization of the bomb and the significance of apocalypse to Benjamin’s theory of history. I will then discuss Tayo’s sickness returning from the war as it relates to the convergence of his personal history with those of his people and of human civilization more broadly. The remainder of my argument will be an examination of the complex and composite identity that he rediscovers in his healing ceremony — one that bridges multiple ethnicities and unites with animal life and the land itself, culminating in the image of sunrise.