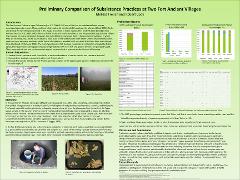 A key issue in Anthropology is the interplay between the environment and culture as they affect human behavior. An effective way to judge the relative extent of these influences is to examine the subsistence strategies employed at two sites that are part of the same culture but which are located in different ecological zones. This project focuses on two Fort Ancient villages known as Taylor and Guard. The Fort Ancient Culture is a pre-Columbian (ca. A.D. 1000-1650) way of life that included established homes, developed agriculture, stored food, and intertribal trade with sites located throughout the Ohio Valley. These two villages are similar in many regards: they are both early Fort Ancient sites, they are similar in size and settlement layout, and they were both agricultural villages that focused on maize cultivation. However, the main difference between them is the environmental zones in which they are located. In this project, the faunal remains from these two sites were examined to determine if they were pursuing similar subsistence strategies when it comes to eating animals. First, the Number of Identified Specimens was calculated by sorting the bones into the major classes of animals and then counting the number of bones in each class. Then, each bone was identified to the specific element, genus and species in order to calculate the Minimum Number of Individuals present. The data from the two sites were then compared to see if they were eating similar amounts of the same kinds of animals. It was hypothesized that, because these sites are located in ecologically distinct zones, their subsistence strategies were accordingly distinct. However, the data shows that their diets were very similar. Possible explanations for these results will be offered, including environmental constraints and cultural influences that could have led each site to pursue their strategy.