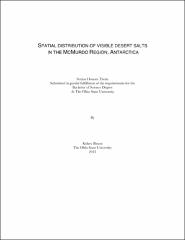 Desert environments are distinctive in that they are the only landscapes that accumulate salts in measureable quantities. The McMurdo Dry Valleys in Antarctica are classified as a polar desert, as they maintain very low relative humidities by the sweeping katabatic winds that descend upon the continent and produce very little (<3cm annual) precipitation. Salts are abundant and a notable feature of the soils. Surficial salt crusts were sampled in the top 2 cm of soils in the Dry Valleys and on Ross Island in the area surrounding McMurdo Station to determine their source for formation, as well as to identify spatial trends in the data. Unlike previous salt studies, this one focuses on visible, surface salt crusts with soil depth possibly through sequential evaporation of groundwater as it moves to the surface. Using structural and textural criteria, 2 types of salt crusts may be distinguished: (1) widespread surface crusts with little structure; and (2) thicker salt crusts with amorphous shape that form near boulders. Subsurface soluble salts and stratified salt crusts were not sampled in this study. Chemical analysis of the major ions indicates conflicting trends in major marine ions, suggesting that the marine influence in salt formation is not as significant as was hypothesized. Sodium is the major cation, averaging 70-90% of all major cations measured. Chloride and sulfate are the major anions in the salts, with chloride being the most abundant (<70%) in Taylor Valley surface salts, though it is less abundant at McMurdo station. Higher elevation coastal areas have abundant calcium, up to 60 meq/kg sediment sampled. Statistical analysis reveals that salt chemistries are not significantly different with respect to their sampling elevation, location, and proximity to a water source. Qualitative comparisons of salt chemistries show an influence of formation “type,” as salts accumulated under large particle faces are chemically distinct from those that were found alongside streambeds.