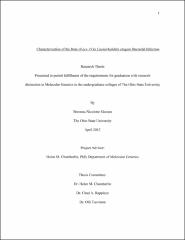 The human body attracts a large number of bacterial pathogens, many of which have detrimental effects on the host and add a tremendous economic burden. Caenorhabditis elegans and its interaction with the bacterium Microbacterium nematophilum is a great model system to study various aspects of host-pathogen interactions including bacterial attachment, nematode surface antigen variation, host response to infection, and cellular morphogenesis. M. nematophilum adheres to the post-anal region of the nematode, causing it to display a deformed anal region (DAR) phenotype and experience severe constipation. Previous research has shown that among the genes up regulated in C. elegans in response to M. nematophilum infection is acs-19, a gene encoding acyl-CoA synthetase, which plays a role in lipid metabolism. I have been investigating the specific function of ACS-19 and its role in this interaction. Specifically, I am studying whether its up regulation is dependent on the transcription factor EGL-38. So far, I have observed that the expression of acs-19 goes down in egl-38 mutants with respect to wild type. I am also using RNAi to knock down acs-19 gene expression to investigate whether its up regulation in response to infection is involved in the host’s defense against the pathogen, or if it is something necessary for pathogenicity. I have found that the upregulation of acs-19 reported in the microarray experiments are part of the bacteria’a infection mechanism and that the DAR response is not dependent on egl-38. In the future, I will test the possibility of changes in ACS-19 protein localization in response to infection.