The Effect of EF-P on tRNA Ribosomal P-site Binding 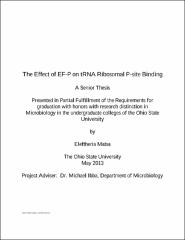 A significant amount of research has been dedicated to characterizing how EF-P is intracellularly modified, as well as how it assists in stabilizing the ribosome during protein synthesis. Both of these functions involve the amino terminal domain of EF-P (also known as Domain I), which not only receives all modifications, but also makes critical positional contacts near the peptidyl transferase center and the aminoacyl acceptor stem of the initiator tRNA. (2) However, in 2009 Blaha, et al. published a structural analysis of EF-P that directed readers’ attention to additional contacts made between the Y180 and R183 residues of Domain III and the small ribosomal subunit. These residues were observed to interact with the A1339 and G1338 nucleotides in the 16S RNA of the 30S small ribosomal subunit of EF-P, which are thought to create a ‘gate’ between the P-site and E-site of the ribosome. They proposed that these interactions could help “prevent premature movement of the initiator tRNA to the E-site” or “enhance the gate [between the E- and the P-sites] and stabilize the fMet-tRNAifMet in the P-site.” (2) Likewise, this thesis is interested in the questions of whether these residues are essential for EF-P functionality in vivo, and whether they enhance EF-P’s function more than just by helping it interact with the ribosomal complex. The purpose of this project is to determine the effect of mutated EF-P residues on rates and success of ribosomal binding and interactions with the P-site tRNA. In order to address this question, we conducted site directed mutagenesis upon the Y180 and R183 residues of EF-P, and performed the following three assays: complementation assays to assess the growth phenotypes of the mutants; modification tests in which cell lysates were run on isoelectric focusing gels to determine whether the mutants were still aminoacylated with BLys; and, fMet puromycin reactivity assays to indirectly gauge the ability of the mutant EF-P to successfully bind to the ribosome.