The Functional Role of miR-155 in Natural Killer Cells 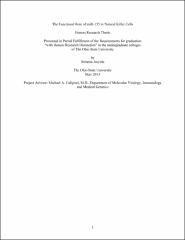 MicroRNAs (miRs) are small, non-coding RNA molecules with important regulatory functions. It appears that miRs are involved in lymphocyte, specifically Natural Killer (NK) cell, homeostasis, activation, and over-activation leading to malignancy. The human NK cell is controlled by a milieu of activating and inhibitory signaling that explain its highly regulated role in the immune response. The role of miR-155 in NK cells is complex and has direct effects on a variety of signaling pathways. In terms of external control on miR-155, we note that miR-155 is synergistically induced in primary human NK cells after co-stimulation with IL-12 and IL-18 cytokines. Additionally, miR-155 directly targets SHIP1, a molecule that is an important negative regulator of pathways involving survival and proliferation. Based on this preliminary data, we hypothesize that miR-155 plays a key role in regulation of activating pathways in NK cells. In order to study the role of miR-155 in NK cells, a miR-155 transgene (tg) overexpression was driven via the lck promoter in C57BL/6 mice. Once again, MiR-155 targets and downregulates the inositol phosphatase SHIP1, which is a negative regulator of NK cell activation. Phenotypically, miR-155 tg mice have enlarged spleens with greater absolute number and percentage of NK cells. Using purified NK cells from spleens of miR-155 Tg and wild type (wt) mice, we observed that miR-155 upregulation increases NK cell cytotoxic activity against tumor cells utilizing both spontaneous cytotoxic and antibody dependent cell mediated cytotoxic pathways. NK cells from miR-155 tg mice have similar or lower levels of cytotoxic Perforin and Granzyme proteins compared to wt NK cells. Overexpression of miR-155 in primary mouse NK cells resulted in increased IFN-γ secretion after stimulation with IL-12 and IL-18. These data link miR-155 expression with stimuli that strongly induce IFN-γ in NK cells and suggest that miR-155 functions as a strong positive regulator of IFN-γ production. Mechanistically, we observed downmodulation of SHIP1 that correlates with an increase in PI3K and ERK, which are signaling regulators of NK cell cytotoxicity. Collectively our data indicate that NK cells overexpressing miR-155 exhibit enhanced cytotoxicity which is likely due to an increase in activating signaling. Overall, we have shown significant differences in activation and homeostasis suggesting that miR-155 can play a major role as a positive regulator of NK cell effector function. The study shows that miR-155 plays an important role in activation of NK cell immune function with implications for treatment of cancer.