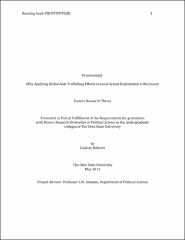 This paper explores the phenomenon of sex trafficking, focusing on what must happen on the local level in order for change on the global level to occur. The paper makes use of a number of sources including documentaries, journals, books, and government documents to provide information on the current state of worldwide trafficking, academic strategies for anti-trafficking efforts, and local occurrences of sex trafficking. Because much of the sexual exploitation occurring on the local level (most often in the form of prostitution) meets the standard for sex trafficking, the protocol for fighting trafficking worldwide will be applied to the local level. The paper will then analyze the local fight against sexual exploitation and suggest more effective ways to eradicate the phenomenon, beginning with a societal shift in how we perceive prostitution.