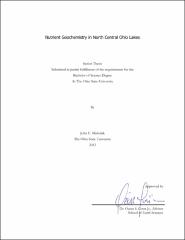 Eight lakes in north central Ohio have been sampled to review their nutrient chemistry. Analysis was also done to compare the variation in nutrient concentration at primary locations of recharge and discharge. Five of the lakes have primary inlet and outlet stations which have also been sampled. The three reservoirs only have lake sampling measurements. The samples were collected starting in December of 2010 and continued through September of 2012. The lakes would be classified as small and the largest of them is 1350 acres. All of the water samples collected were run through a Skalar nutrient analyzer and tested for PO43- , NH4- , and NO3-+NO2-. Once the data was compiled, graphs showed all eight lakes/reservoirs with the variations in chemistry of the three nutrients. Based on the average nutrient concentrations of the lakes studied, they are considered to be in poor biological condition. The data also shows that the lakes are acting as a sink for nitrogen based on the variation of inlet and outlet concentrations. Cyanobacteria decomposition was an important factor in the concentration of ammonium concentrations at various locations sampled in the lakes.