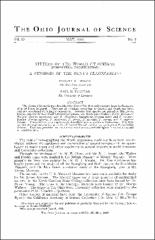 The Genus Clinonaria was described by Metcalf in 1949 and contains large leafhoppers, 10 to 16.5 mm in length. They are all tropical, occurring in Central and South America, and are associated with jungle vegetation. Seventy four species are placed in this genus; twelve, previously described in four other genera, are Scaris picea Walker, Darma bipunctata Walker; Gypona marmorata and G. alboguttata Spangberg; Gypona hebes and G. decorata Fowler; Ponana afinula, P. bicolorata, P. grossa, P. notatula, P. sarana, and P. sulfurea Osborn. The other sixty-two species are described as new species of Clinonaria. The type species of the genus was designated as C. bicolor Metcalf, which is a synonym of P. bicolorata Osborn. Keys are provided for both males and females, and 368 figures are used as an aid in identification.