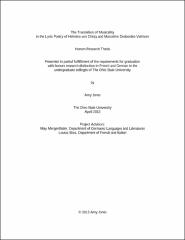 Authors of the Romantic period, striving for artificial naiveté and “singableness,” wrote poetry in which form and content were inseparable and which had an innate musicality. The resulting close alliance between sound and meaning is essential to a reader’s understanding of a Romantic poem in the original language. For my honors thesis, I am composing translations that recreate the musicality of the original while retaining its meaning. I am analyzing and translating two short love poems, Helmina von Chézy’s 1816 song “Maygrün,” written with Georg Grafen von Blankensee, and Marceline Desbordes-Valmore’s 1830 medievalesque poem “Dors ma mère.” I define musicality, based on essays by poets, musicians, and critics, as the meaningful totality of a poem’s sound, sense, and structure. A poem’s sound includes the natural auditory elements of a poem, which include rhythm, rhyme, and other effects such as assonance and repetition. Its sense includes semantic meaning as well as the emotional or other effects on readers, and its structure includes repetition, form (such as sonnet or couplets), and visual elements such as stanza length that affect auditory perception. For each poem, I first created a literal translation to discover which musical qualities of the poem were lost in the process and which ones I wanted to emphasize in the translated version. I then experimented with different ways of retaining that musicality to arrive at a musical translation that balanced sound, sense, and structure and satisfied my intuitive, subjective sense of a good poem. For a reader who is sensitive to all aspects of poetry, a musical translation of a particular poem can supplement existing translations that focus on modernizing, domesticating, or other goals. By imitating the original aural experience, a musical translation challenges the reader to hear the poet speaking through the filter of translation.