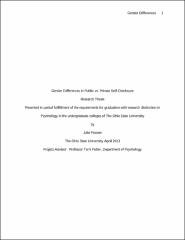 It is known that women consistently self-disclose at higher rates than men do, but what about public vs. private disclosure of behavior? In this study, groups of up to eight individuals were tested by a male or female assistant. Participants (in either same-sex or mixed-sex groups) were asked to fill out a private, online set of questionnaires (including the Hypergender Ideology scale, the Marlowe-Crowne Social Desirability scale, a questionnaire of sensitive activities and attitudes, and demographic questions). After all participants were finished with the online questionnaire, the assistant indicated that there was a malfunction with the surveys and ten questions were asked orally, with participants raising their hands if they have engaged in the behavior (such as “Have you had more than three sexual partners?” or “Have you ever used illegal drugs?”). Data were collected from 221 students. Results indicated no support for the hypothesis that women disclose at higher rates than men, nor was support found for the hypothesis that women self-disclose at higher rates publicly while placed in a same-sex group. Contrary to previous research, results showed that public self-disclosure rates were higher within mixed-sex groups compared to same-sex groups. Results also showed that men were more willing to disclose to a male researcher and women were more likely to disclose to a female researcher.

This thesis received an excellence award from the Mansfield Research Forum

This thesis was funded by a Student Research Grant from the OSU-Mansfield campus.