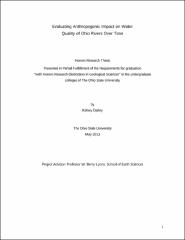 Natural and anthropogenic factors affect the geochemistry of rivers and streams in both rural and urban areas. Much of the impact on fresh water in the U.S. comes from non-point sources, with population and land use playing an important role. Two major anthropogenic inputs to surface waters are chloride and sodium, derived mostly from urban contributions such as road salt. Additionally, nitrate represents another large input, primarily from agricultural sources such as fertilizers. Many water quality studies exist for rivers and streams in parts of the Northeastern U.S., which have yielded increases in chloride concentration over time. Concerns in central Ohio arising from road salt application and storage practices have developed in the past few years, including potential chemical effects on local wildlife in streams and road salt’s role in polluting Ohio drinking water. Historical data on fresh water quality exist for many Ohio rivers but haven’t been further utilized to observe ion concentration trends over past decades. Past data were tabulated from the United States Geological Survey and The Ohio State University School of Earth Sciences to identify long-term trends in ion concentrations in rivers at multiple locations throughout the greater Columbus and central Ohio area. In June 2012 and March 2013, a number of sites were sampled for major ions and nutrients and compared to previous data. Comparing the 2012-2013 samples to those from same sites in the past, identifiable trends showing general increases in ion concentration over time were found in the river locations with complete historical data sets. The time series of some localities are not complete due to many gaps in data collection over the past 40-50 years. Analysis of chloride to bromide mass ratios in the Ohio surface waters revealed that the source of chloride was likely halite, or road salt.