Ocean oxygenation during the Middle Ordovician: links to biodiversification? 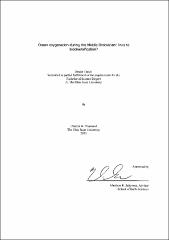 During the Ordovician period, biological diversity experienced a threefold increase (Great Ordovician Biodiversification Event). This expansion took place in several steps, with one of the largest pulses of diversification occurring in the Middle Ordovician (Darriwilian). This study presents paired carbon isotope data from carbonate and organic matter from the Antelope Valley Limestone of Meiklejohn Peak, Nevada, a Darriwilian carbonate sequence. A correlation is established between this section and two Estonian drill cores in which the MDICE has been previously reported. This correlation, based on carbon isotope stratigraphy, is supported by paleontological evidence. These data represent the first documentation of the Mid-Darriwilian Carbon Isotope Excursion (MDICE) from western Laurentia. The paired results of this study show a stepwise increase of approximately 3‰ in photosynthetic fractionation through the early stages of the MDICE, consistent with an increase in atmospheric oxygen of up to 18% (i.e. an increase from a starting atmospheric oxygen concentration of 10% to 28%). Increases in atmospheric oxygen are thought to have played a critical role in key evolutionary developments throughout time, such as the rise of animals at the end of the Precambrian and the gigantism seen in arthropods of the Permo-Carboniferous. The timing of the pulse of oxygen observed in the Darriwilian coincides with the timing of rapid biodiversification, suggesting that the two may have been intimately linked.