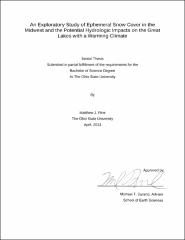 Snow cover in the Midwest is a primary contributor to the hydrologic cycle and has significant surface energy balance, biogeochemical, ecological, and societal impacts. This exploratory study addresses some of these issues and looks at some of the primary drivers that affect a snow cover in the Midwest. Much of this region is dominated by an ephemeral snow cover, so the first issue to be addressed is to define what is meant by ephemeral snow and where exactly it transitions into an all-winter (seasonal) snow cover in the Midwest. An ephemeral snow cover is one that comes and goes throughout the winter months, having no seasonal duration. For example in Columbus, Ohio winter average temperature is 2° Celsius, and snow cover has a typical duration of less than 15 days. How well can average winter temperature be used to predict duration of snow cover throughout the winter months? I found that when comparing snow duration to average winter temperatures it is seen that there is an 11 day increase with each degree Celsius decrease. The third and final issue is a look at how the hydrology of the Great Lakes region will be affected by a temperature increase of 2° Celsius. My research shows that as much as 25 percent of the snow cover in the Great Lakes Basins will shift from a seasonal to an ephemeral snow pack with a 2° increase. There is a transition zone at an average winter air temperature of -4° to -6° Celsius where the seasonal pattern shifts from a seasonal snow cover to more of an ephemeral pattern. If we were to experience a 2° increase, the areas on this border of a seasonal snow cover would inevitably shift from a seasonal to ephemeral snow, and would have 15 to 20 days fewer of snow cover a year. These ‘at risk’ areas would have implications on the Great Lakes if they were to begin to provide runoff throughout the winter as opposed to having a single spring melt event yearly.

The College of Arts and Sciences Honors Research Scholarship