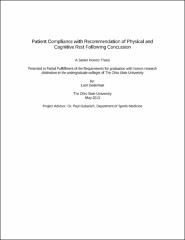 An important area of emphasis in the media and sports governing bodies during the past two decades has been the dilemma of traumatic brain injuries, namely concussions. The CDC reports that over 1.2 million mild traumatic brain injuries occur each year, and recent literature reports that concussion injury continues to rise in incidence across all levels of sports participation. Despite evolutionary efforts in both concussion treatment and prevention, and important hurdle to managing concussion yet remains: patient compliance with the physician's recommendation of physical and cognitive rest. The current study tracked two patients during the two weeks following a single, acute concussion injury. During these two weeks levels of daily physical and cognitive activity, as well as symptom severity, were recorded and compared with controls. Both patients showed non-compliance with the recommendation of cognitive rest during the first week post injury, while only one was non-compliant with the recommendation of physical rest during the first week post-injury. This patient also demonstrated more severe and prolonged symptoms than the patient who did physically rest during the first week post-injury. The current study presents an interim analysis of available data, and remains actively recruiting participants as of the date of submission.