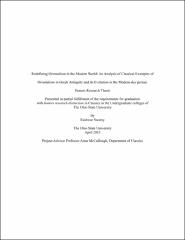 analysis of Orientalism: Classical vs. Modern

The basis of the paper surrounds Said's definition of orientalism, which essentially draws the distinction between East and West by defining one in terms of the other. “The Orient has helped to define Europe (or the West) as its contrasting image, idea, personality, experience” (Said, Orientalism, 2). Said goes on to say “the orient is not just adjacent to Europe....it's one of its deepest and most recurring images of the other” (Orientalism, 1). Various Greek authors in the classical era helped in forming the framework of orientalism, which later was implemented in Edward Said to define the relationship between East and West. Classical orientalism thus, as it pertains to this paper, is the orientalism which was practiced by classical Greek authors. The first section of the paper will discuss major literary, historical, and dramatic passages from classical antiquity which give examples of what orientalism was framed as in the classical era. This section will also emphasize the clear evolution of the concept of orientalism. In classical antiquity, orientalism was defined within the scope of East vs. West, with distinctions being based on climate, climate's relationship with governance and politics, and political geography. The second half of the paper will discuss the evolution of the concept of orientalism in the modern-day time period, from the end of the Cold War Era onwards, with specific emphasis placed on U.S. and regional European foreign policy. I will show through various modern-day examples that the concept of orientalism still exists, but the scope, level of distinction between the two “groups” and the parameters of comparison have changed. In the modern-day time period, orientalism has taken on a different meaning, for though there is still an East vs. West mentality, in regards to the “other,” the primary “other” as viewed by the West, is Arab Muslims. In terms of the parameters of defining this new orientalist comparison, the primary areas of contrast are sociocultural values, religious identity, and the concept of governance as it relates to religion.