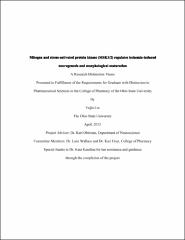 Pathophysiological conditions such as cerebral ischemia (stroke) trigger the production of new neurons in the hippocampus dentate gyrus. The functional significance of ischemia-induced neurogenesis is believed to be the regeneration of lost cells, thus contributing to post-stroke recovery. However, the cellular signaling mechanisms by which this process is regulated are still under investigation. Recent data from our lab indicate a role for mitogen and stress-activated protein kinases (MSK1/2) in the regulation of hippocampal progenitor cell proliferation after repeated seizure insult. In the present study we tested the hypothesis that MSK1/2 signaling is a regulator of ischemia-induced neurogenesis and neuronal morphological maturation. To test this hypothesis we induced transient ischemia by infusion of the potent vasoconstrictor endothelin-1 into the hippocampus. Following ischemic induction, hippocampal tissue was immunolabeled for bromodeoxyuridine (BrdU, a marker of newly dividing cells) and doublecortin (DCX, a marker for immature neurons). Detailed analysis of the granule cell layer (GCL) of the dentate gyrus indicates delayed maturation of newborn neurons in MSK1/2 null mice compared to wild type (WT) controls. Further, we performed a structural analysis of BrdU-tagged neurons born after ischemia in order to evaluate the maturation of the newly generated neurons, as a measurement of function capability. Taken together, these data suggest that MSK1/2 plays a significant role in the regulation of ischemia-induced neurogenesis and we will further investigate the morphological maturation of the newborn neurons.