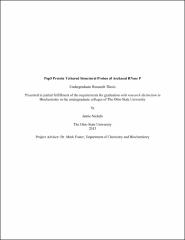 Ribonuclease P (RNase P) is an essential and ubiquitous ribonucleoprotein (RNP) complex that catalyzes the removal of the 5’ leader sequence of precursor tRNA molecules. It contains one catalytic RNA subunit in most organisms and a varying number of protein subunits: bacteria ≥1, archaea ≥5, and eukarya ≥10. Due to the complexity of eukaryal RNase P, the RNP complex has only been partially characterized in Saccharomyces cerevisiae and Homo sapiens. However, because the archaeal ribonuclease P proteins (RPPs) share homology with five of the eukaryal RPPs, archaea such as Pyrococcus furiosus (Pfu) have been used as model organisms to study the structure and function of the RNP complex. Pfu RNase P contains 5 protein subunits: Pop5, RPP30, RPP21, RPP29, and L7Ae. Pop5 and RPP30, as well as RPP21 and RPP29, form heterodimers in the absence of RNA and appear to contribute to catalysis and substrate specificity, respectively. Structural studies of RNase P have shown that the bacterial protein subunit C5 interacts with the 5’ leader sequence of precursor tRNA. Because the archaeal protein subunit Pop5 shares structural homology with C5, it has been hypothesized that Pop5 similarly interacts with the substrate in the archaeal RNase P context. Previously generated Pop5 single cysteine mutants were used to recombinantly express mutant proteins, subsequently purified from E. coli, and assayed for function. Next, they were modified with disulfide-linked EDTA-Fe, which upon addition of hydrogen peroxide generates hydroxyl radicals. Hydroxyl radicals are short lived and react with any RNA within ~14 Å. Therefore, RNA molecules within the vicinity of the EDTA-tagged Pop5 subunit will be cleaved, identifying a close RNA-protein contact. By this method, sites of RNA cleavage are detected by primer extension assays using reverse transcriptase and sequence-specific primers, and the resultant DNA fragments resolved on a polyacrylamide gel. The observed cleavage patterns will provide intermolecular distance restraints allowing Pop5 to be positioned within the holoenzyme complex.

A five year embargo was granted for this item.