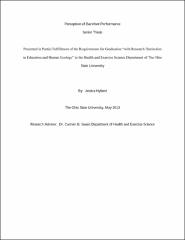 The phenomenon known as 'barefoot running' has made a recent comeback. In response to the barefoot running craze, a 'shoe' has been developed to allow runners to train "barefoot" but provide some basic protection. Many runners that have used these shoes and claim improved performance and less injury. Previous research suggests barefoot running may alleviate injuries by altering biomechanics. The performance and psychological aspects of running in minimalist shoes (BAREFOOT) compared to traditional shoes (SHOD) is less understood. PURPOSE: To examine differences that may exist in performance and subjective ratings during a race situation in the BAREFOOT and SHOD conditions. METHODS: Fourteen male, trained BAREFOOT participants engaged in a 2-mile time trial (RACE) to the best of their ability. Subjects randomly performed the RACE on a treadmill during two separate occasions, BAREFOOT and SHOD. Subjects controlled speed using an up or down button, but were blinded to the running speed and time to completion. Subjects were asked every half-mile to responds to the Feeling Scale (FS) and Rating of Perceived Exertion Scale (RPE). A qualitative questionnaire was administered to gather information related to motivation and subjective responses to running in the BAREFOOT condition. Paired-T tests were used to examine differences between conditions, alpha was set at p<0.05. RESULTS: No significant differences were found for time to completion and RPE measures. The BAREFOOT condition scored significantly higher (p=0.011) on the FS compared to SHOD condition. A standardized scale was created by combining RPE and FS, which resulted in significant higher results (p=0.013) for BAREFOOT condition compared to SHOD. CONCLUSIONS: Running in a minimalist shoe feels easier for those who have trained in them. Trained BAREFOOT runners feel better at all levels of effort in the BAREFOOT condition, despite no improvements in race time.