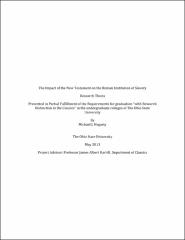 Throughout the New Testament, there are several references to slaves. My goal is to analyze these references along with other contemporary Roman literature, as well as early Christian literature after the New Testament, in order to gain insight into whether the New Testament had any effect on the Roman institution of slavery. I begin with an analysis of the Gospels of Matthew and Luke. Within these Gospels, slaves are referenced several times, mostly in the parables in which Jesus uses the slave-master metaphor to represent the relationship between disciples and God. In addition to parallels between this metaphor and Stoic philosophy, which arose long before the Gospels were written, I note stock themes seen in Roman comedy upon which the plots of these parables turn. I then move to early Christian literature up to the fifth century in search of evidence for any “amelioration” of the Roman institution of slavery that may have arisen out of the teachings in the Gospels of Luke and Matthew. I find little evidence to support the claim, typical in many textbooks, that the reception of the Gospels of Matthew and Luke ameliorated the Roman institution of slavery. I am currently working on broadening my research to include an analysis of Paul's epistles, the later Deutero-Pauline epistles (those that bear Paul's name but modern scholars doubt the apostle Paul actually wrote), and patristic commentary on the gospels by the Church Fathers. Although my research is ongoing, my working hypothesis is that if the New Testament had any effect at all on the status quo of Roman slavery, it was a reinforcement of it.