The effects of kindlin3 on osteoclast function 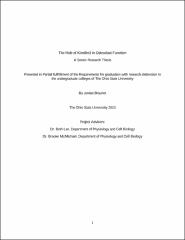 Osteoclasts are a bone cell type responsible for the breakdown of bone. They display cell surface integrins that help activate signaling cascades that control the differentiation and function of osteoclasts. The kindlins are a family of proteins that are involved in activating integrin function and enhancing cell attachment to substrates. Kindlin3 is expressed solely in hematopoietic cells, including osteoclasts and their precursors. Mutations in kindlin3 are associated with a human syndrome, Leukocyte Adhesion Deficiency III (LAD-III) whose symptoms include osteopetrosis, which is bone brittleness due to non-functioning osteoclasts. The kindlin3 C-terminal tail is composed of three FERM (integrin-binding) domains, F1, F2, and F3 and one PH (membrane lipid-binding) domain that interrupts the F2 domain. The goal of this work is to determine the roles of kindlin3 and its domains in affecting osteoclast differentiation and function. Our studies demonstrated that kindlin3 is upregulated during differentiation indicating its role in activating differentiation. These data further showed that overexpression of the F2 and PH domains together in osteoclast precursors inhibited their differentiation. However, the overexpression of the PH domain alone did not. This work was continued to determine the role of the various tail domains in osteoclastic bone resorption activity. Overexpression of the F1, F2, F3 and PH domains individually affected the ability of osteoclasts to resorb bone. The three FERM domains caused a decrease in the clearing size and overall resorption while the PH domain also leads to a decreased clearing size but an increase in the overall resorption. These results are helping to dissect the functional domains of kindlin3 in an effort to understand how mutations can cause the osteopetrosis of LAD-III.