Who’s Invested in Their Neighborhoods? Investigating Residential Land Ownership After the Housing Crisis 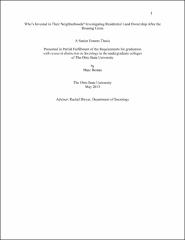 Since the collapse of the steel industry in the late 1970s, the economy of Youngstown, Ohio has been greatly diminished. These losses are greatly reflected in the city’s housing market, where property values have declined well below the national average and population loss has led to a significant surplus in housing stock. While many homes are demolished, this does not outpace continuing population decline and as a result many dwellings are bought by non-occupant owners, both local and non-local. In the wake of the late 2000s foreclosure crisis, more opportunities opened up for speculators to buy homes, and with continued population hemorrhaging these owners have a real possibility to shape residential neighborhoods. Employing a comparative case design of neighborhoods featuring varying levels of racial composition and homeownership rates, I drew demographic data from the American Community Survey and local records of property ownership in addition to physically observing selected neighborhoods to determine the amount of non-owner occupied homes in the area and their impact. I found varying levels of impact between local and nonlocal speculators, with nonlocal owners taking on an increased presence, particularly in low-income, African-American neighborhoods.